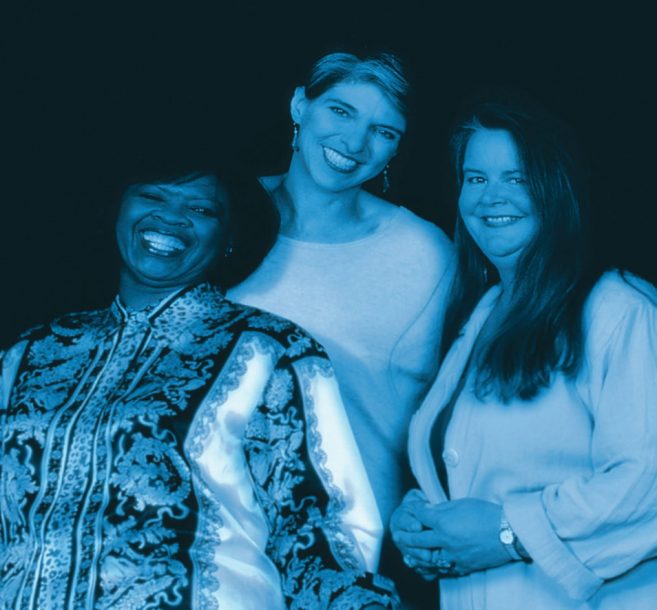 It was two Jazz Fests ago down in New Orleans that R&B veterans Marcia Ball, Irma Thomas and Tracy Nelson happened to share a stage together. They all had new albums out on Rounder Record around that time and were appearing individually with their respective bands at the annual end-of-April-beginning-of-May blowout in the Crescent City. The three ladies did an afternoon in-store performance at the local Tower Records on Decatur Street in the French Quarter to promote their albums and later that evening appeared together at a benefit for radio station WWOZ. It was there at the Maple Leaf nightclub Uptown that something clicked. Marcia and Tracy had each performed a set but then the two got up on stage with New Orleans’ undisputed soul queen Irma Thomas to belt out a few impromptu Irma classics like “It’s Raining,” “Time Is On My Side” and “You Can Have My Husband But Please Don’t Mess With My Man,” all big hits from the early ’60s. Brad Paul of Rounder noted the instant chemistry and raised the possibility of a few more dates together. Irma upped the ante by suggesting, “Why not do an album together?”

And so a concept was born.

Armed with a batch of new songs by such crack R&B tunesmiths as David Egan, Dan Penn, Sarah Campbell, Sarah Brown, Gary Nicholson and Steve Cropper, the three ladies went into the studio with producer Scott Billington and an all-star aggregation of Memphis and New Orleans players. The resulting album, aptly-titled Sing It!, is chockful of earthy, Southern soul in the Stax/Volt/Minit Records tradition (“Love Maker,” “People Will Be People,” “Woman On The Move”) along with touches of foot-stomping gospel (“Yield Not To Temptation”), infectious second line grooves (“Sing It!”) and stirring, emotionally charged ballads (“In Tears,” “Heart To Heart”).

It’s a fabulous soul summit meeting that highlights the ladies’ individual talents while also serving up some snappy three-part harmony. “It’s surprising how well that works,” Marcia Ball says of their intuitive vocal blend, “…none of us being harmony singers, really.”

“Marcia and I spent a great deal of time, especially early on, imitating Irma,” explains Tracy Nelson. “So in that sense it’s not surprising that we’d be able to blend. Even my own mother doesn’t know who’s who sometimes when she’s listening to this record. Of course I do, but there really are times when it’s not real clear exactly who singing. And I think it’s at those times when Marcia and I are falling back on our ‘let’s sing like Irma stuff’ that people might tend to get confused.”

For Ball and Nelson, this vocal summit was the dream of a lifetime. Both had been avid Irmaholics in the early stages of their careers before eventually establishing their own unique voices. To finally sing alongside the sultry-voiced soul queen of New Orleans put them both over the moon.

“When I was starting to develop my rock ‘n’ roll style I really imitated her a lot,” says Tracy. “I did a lot of her songs then, I’ve always done a lot of her songs. (Indeed, her 1976 album Time Is On My Side on MCA is dedicated to Irma). I’ve just always loved the way that she approaches and delivers a tune so I stole a lot of her licks and nuances over the years.”

Following a solo acoustic recording for Prestige in 1965 (the Ma Rainey-inspired Deep Are The Roots, produced by Sam Charters), Nelson moved to San Francisco in 1968 and formed the psychedelically inclined blues-rock band Mother Earth. The band stayed together for five years and recorded several albums for Mercury (a Mother Earth compilation was recently released by Warner Bros.). It was in 1969, around the time the band moved its base to Nashville, that Tracy finally met Irma.

“On a whim we went down to New Orleans to look for a new keyboard player. That was in the days when record companies would do anything you said and pay you to do it. So Mercury sent us down to there and we checked out the scene. While we were down there I was determined to go hear Irma sing. I had asked around and everybody told me about this Elks Club somewhere out in West Louisiana. So we got in the car and drove literally through the swamps to this little clearing where there was this little cinderblock building, and Irma was performing there. I went in, got quite a few curious stares as I strolled up to the stage, and I introduced myself to her. She still remembers that, partly because it was just so bizarre for somebody to seek her out in this particular venue.”

Tracy and Irma became fast friends over the years and even recorded one track together, a first-rate cover of Percy Mayfield’s “Please Send Me Someone To Love” on Nelson’s 1993 Rounder album, In The Here And Now. “That was the first time that we recorded together and I kind of figured it was also the last,” says Tracy. “It was such a special event I didn’t foresee anything beyond that. I figured we kind of climaxed right there.”

Tracy and Marcia had met several times over the years. “We’d bump into each other a lot at festivals and on the road,” Tracy recalls, “and most of the time we’d talk about what a great singer Irma was.”

While attending Louisiana State University in Baton Rouge during the late ’60s, Ball had an opportunity to see Irma perform weekly at the Blue Bull. “Now I regret not going to see her back then,” she says. “I wasn’t of age, for one thing. And at the time, I wasn’t playing music, which is my other excuse. By the time I started playing music and it would’ve meant so much to me to be able to see her, she had already moved out to California.”

Growing up in the Louisiana border town of Vinton-part of the ‘Texas triangle’ region that has produced such rootsy artists as Janis Joplin, George Jones, Gatemouth Brown, Queen Ida, Johnny and Edgar Winter, Lonnie Brooks, Kenny Neal, Zachary Richard and Clifton Chenier-Marcia (Mouton) Ball started out as a rock ‘n’ roll singer in college before switching gears to country and R&B after a move to Austin, Texas, where she still resides. An accomplished pianist who combines the best of Jerry Lee Lewis and Professor Longhair into her playing (she was recently featured on Marian McPartland’s “Piano Jazz” show on National Public Radio), Marcia is also an affecting vocalist with a penchant for jump blues, passionate ballads and second line rhythms. She has released half a dozen strong albums for Rounder, the latest being last year’s Let Me Play With Your Poodle.

“My voice has gone through some evolution over the years,” Marcia notes. “I’m a smarter singer and I’m a stronger singer now. And I probably sang a little higher back then. But even in my younger days I was not a soprano, which is one of the things I loved about Irma. There were just a handful of people out there who made us girls who didn’t sing high feel like we could sing too. When everybody else was chipmunkin’ around like the Supremes, there were people like Irma and Etta James and Odetta who made us realize that we could wail.”

Irma’s life story is the stuff of legend. Born Irma Lee in rural Ponchatoula and raised in New Orleans, she was pregnant at 14, married at 15, divorced and remarried by 17, the mother of four by 20 and divorced not long after that. Discovered by pianist-bandleader Tommy Ridgley while working as a singing waitress at the Pimlico Club in the French Quarter, Irma cut her first record near the end of 1959 for the local Ron label. In late 1960 she began working with producer Allen Toussaint, the creative force behind Minit Records. It was the beginning of a musical friendship that lasts to this day.

In retrospect, Irma was a child when she recorded R&B classics like “It’s Raining,” “Ruler Of My Heart” and “Time Is On My Side,” a tune that later became a hit for the Rolling Stones. And while her raw talent was apparent on those early recordings, she feels that her singing is much better today.

“My voice got stronger and more authorative,” she says. “I was 17, 18 years old when I did those first records. Now I’m 56. There’s a big difference there. I understand what I’m doing a lot better now. Even though I was young back then, I was old enough to know what pain was and had experienced some degree of it. But I know it even better now because I’ve had time to mature and understand life a lot better. Rhythm and blues and blues…either way you’re singing about life experiences. And I’ve had a lot more of that now.”

That seasoned quality can be heard in Thomas’ last Rounder release, The Story Of My Life, her finest in years. On the strength of soul stirring performances on “I Count The Teardrops,” “Hold Me While I Cry,” “I Won’t Cry For You,” “Cried Too Long” and the title track, this album stands as definitive Irma Thomas. And yet, the great singer was disappointed in the reception the album received in her hometown. “Locally, I don’t get a lot of airplay. In fact, I don’t get any airplay, as far as the new songs. They play all the old stuff but nobody’s playing the new stuff.”

But she’s not bothered about fielding oldies requests in concert. “No, not at all,” says Irma. “In fact, I get a great joy from it by the fact that there are fans out there who still remember and appreciate those times. It’s because of those times that I’m still working. I mean, realistically, I haven’t had a major airplay record since 1964. Even though I’ve had a Grammy nomination (for 1991’s live greatest hits recording, Simply The Best), that album still didn’t make the charts. If it hadn’t been for those songs from the ’60s that I did manage to get some national airplay from, I would not have a gig today. So I enjoy the fact that they still wanna hear those things and I don’t mind doing them.”

Meanwhile, Irma and her two Sing It! cohorts are harboring some high expectations for their soul summit meeting. “In fact,” says Irma, “the three of us was joking the other day, saying, ‘What are we gonna wear to the Grammies?’ So we’re very optimistic about it.”

Ladies, get your evening dresses ready. Grammy should be calling on y’all.