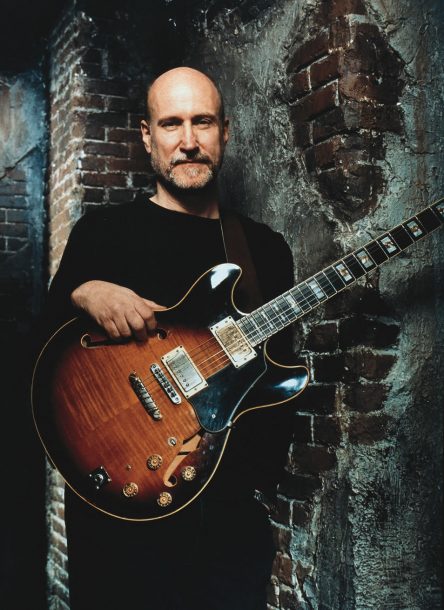 1sIt’s hard to find corporate logos on display in Telluride, Colo. The residents of the tiny mountain town appear to reject the types of chain restaurants and shops that you’d find virtually anywhere else in America. But there was one brand name emblazoned across the front of the stage in Telluride’s Town Park for their annual Jazz Celebration Aug. 2-5. In huge letters, John Scofield’s name was spelled out, as he was this year’s Telluride Jazz Guest of Honor.

“I never thought of myself as a product,” Scofield (pictured) said at a panel discussion in the center of town, where he happily signed autographs and posed for pictures with admirers. The guitarist’s rambunctious, blues/rock-steeped trademark sound permeated the festival, and at least one of his appearances was triumphant.

Trio Beyond, a project pitting Scofield against drummer Jack DeJohnette and organist Larry Goldings, paid fiery homage to fusion pioneers Tony Williams’ Lifetime with a set that was deliberately shambolic and raucous. Scofield was given ample opportunity to put his muscular side on display, while Goldings demonstrated his clear respect for the legacy of organist Larry Young. And DeJohnette is as authoritative as he is fearless at this stage of his career. Since Scofield and DeJohnette are alumni of Miles Davis’ electric bands, they both know a thing or two about sustaining a mood of intensity, and they tore furiously through Woody Shaw’s “The Moontrane” and Ornette Coleman’s “Invisible.” You’ve heard of the organ trio in jazz; Trio Beyond is the power organ trio.

Trumpeter Roy Hargrove also gave a sharp performance with his quintet. He and saxophonist Justin Robinson were downright confrontational in their straight-ahead, sometimes caffeinated set. Hargrove’s suit and tie set him apart from the appreciative cowboy-hat-and-sneaker-wearing Telluride crowd, and after his earnest, smart solos and top-notch support, you can’t help but root for him.

One of Telluride’s surprises was bassist/vocalist Esperanza Spalding’s trio. Successfully weaving together a number of styles ranging from Brazilian to blues, she sang and played with unrestrained joy. Though much of her set occurred in a virtual downpour, common for Colorado mountain afternoons in August, the small, waterlogged crowd responded positively to her charisma and bursts of vocalese.

It was a difficult choice, with trombonist Steve Turre and organist Dr. Lonnie Smith playing at separate venues at roughly the same time, but a couple hundred listeners decided on guitarist Bill Frisell’s trio in Telluride’s high school auditorium. Since the program notes promised guest “Superman” on the “split-ax.” No one was surprised after an hour of Frisell’s incomparable sound comics (the high point was a running of Thelonious Monk’s “Misterioso” through the sonic wood chipper) when Scofield took to the stage.

Scofield’s brief meeting with Frisell was something of a disappointment after the Trio Beyond set a few hours earlier. The Guest of Honor’s straight guitar lines didn’t initially cohere with Frisell’s rubbery sound-world on “You Are My Sunshine,” and though they found some common ground on a more groove-oriented improvisation, it seemed more like a messy guitar-guy-fest than a true collaboration. It was hardly a disaster, rather more of an amiable, unrehearsed meeting of two strong personalities that didn’t quite gel.

There are many summer festivals billed as ‘jazz’ in Colorado’s high-altitude communities, and several are committed to smooth-jazz or pop-oriented fare. Organizers of the Telluride Jazz Celebration have high expectations for their performers as well as the receptiveness of the audience for challenging, more exhilarating music. That’s why this annual undertaking, in its 31st year, was so rewarding.