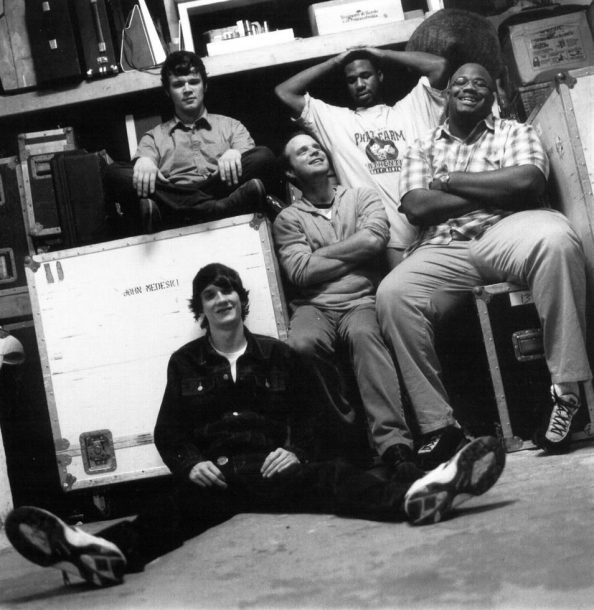 Driving through torrential downpour to a 10-hour outdoor music festival you’re already late for is not an auspicious start to the day. But arriving to find a lineup of expert musicians jamming away and joyful audience members doing head-first mudslides makes up for the day’s inauspicious beginning. The second annual Grassroots Music and Arts Festival took place Sat. Aug. 11 at Oregon Ridge Park in Cockeysville, Md., despite heavy rainfall that persisted throughout the day.

With clothes as whet as their appetites for funk, crowd members gathered around for one of the best jam-band lineups of the year: the Almighty Senators, Lake Trout, the Word (featuring John Medeski, the North Mississippi Allstars and Robert Randolph), the David Grisman Quintet, Sam Bush, Galactic and Medeski, Martin and Wood. Festival attendance dropped half from last year, but you wouldn’t have known it by the number of Frisbees flying around, or the number of times audience members shouted “Dawg!” in reference to David Grisman’s self-coined “Dawg” music, which he defines as an “all-inclusive umbrella” (apt imagery for the rainy day). Grisman’s mandolin was joined on stage by a flute, guitar, upright bass, hand drums and a performance painter named Frenchy who, throughout the festival, painted band portraits as colorful as their music and as tie-died as the Grateful Dead T-shirts that lay on the ground as half-naked mud-sliders took to the swamp baths.

Galactic delivered an explosive set of funky jazz and blues-drenched solos, with one problem: the group’s singer, Theryl DeClouet, who walked on stage mid-set in a head-to-toe, silver-studded bodysuit that was excessive on him as he is on stage. His lyrics were indiscernible, voice muffled and presence out of place in a funk band that needs an R&B frontman about as badly as John Medeski needs a steel-guitar-based side-project. Galactic is brimming with musically gifted instrumentalists whose solos are too short as it is, without the added distraction of a vocalist whose main purpose, it seems, is to steal choruses and spotlights from the more talented musicians in the group.

“We get along so well,” says bassist Robert Mercurio of DeClouet. “He is like a father to us. He gives us advice on everything from love to…well, mainly love.” If DeClouet provides the glue for Galactic, then his role is important; but recognize him for what he is: a morally supportive crooner with little musical relevance to the band.

Another misfire of the day was Sam Bush, a legendary bluegrass man who served up a lukewarm performance with an “If you like Bob Marley, say yeah!” segue way into a bubble-gum rendition of a Marley classic, followed by a forgettable version of “Jumpin’ Jack Flash.”

But the day of music looked brighter as the high-profile new jam band The Word took the stage. The Word includes organist Medeski, but not enough of his funky licks and rocking solos; the godfather of jam confined himself mainly to comping duties for steel-guitarist Robert Randolph, a 24-year-old musician with tons of talent but little discerning taste in how to use it. Randolph’s playing was spirited, soulful and uplifting, but even at its most wailing moments, thin. His sound has a cheery, clean, vegetarianlike quality that Medeski’s meaty, swampy, grumbling organ solos smash to pieces.

Medeski has already proven himself a competently comping sideman on John Scofield’s A Go Go, but as a sideman for Randolph, Medeski seemed itching for an extended solo that never really came. The Word’s performance was enjoyable, but confirmed Medeski as a fiery frontman by nature, not a subdued sideman.

As Randolph describes it, “The Word is rooted in many different traditions. We’re just trying to have fun. Whoever wants to categorize it, let them.” Perhaps the jam-band scene is about having fun, but more fun could be had if the Word featured Medeski more and Randolph less. As it stands now, the band looks more like a good-will project for boosting Randolph’s career, rather than the next step in John Medeski’s musical growth.

But Medeski soon regained the driver’s seat as Medeski, Martin and Wood took to the stage. MMW’s set was energetic, but plagued with problems. Medeski is heralded for his will to explore, but he can often get lost down a path of purposeless chords and arbitrary scales that do more harm than justice to the idea of free jazz. Even the most out-there playing can be pushed too far and become as rote and monotonous as the most down-and-out blues strumming. Not all playing needs to be danceable, but Medeski is beginning to abuse his godfather status and play as though he is incapable of wrong. I overheard one couple say, “Is that music?” “I don’t think so. Haven’t heard any yet,” and continue to dance. The comment was made in jest, but it is revealing. Medeski has turned haphazardness into a certified jazz technique, and while Medeski’s slobbering solos are what brought him success, they are becoming all-too-familiar.

MMW finished its set, successfully, with a crowd-pleasing rendition of “Bubblehouse,” the hypnotic groover that repeats a lick and steadily accelerates in tempo until it reaches a heart-pounding climax and then returns to the main theme, with a funk beat so hard that even drummer Billy Martin and bassist Chris Wood couldn’t help but shoot each other looks of approval. Overall, despite moments of self-indulgence, MMW rocked hard and proved they still have passion for live performance after nine years on the road.

As festival programmers Junipa and Tim Walther announced their plans to take a year off from festivals to raise their seven-week-old baby girl, crowds cheered and began to pack the exits, mud-encrusted fingernails and all-the perfect residue to a perfect day in the park.